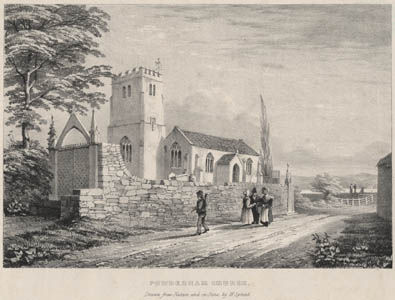 “Powderham Church. POWDERHAM has some considerable celebrity, as well from the lovely scenery in the grounds of the Castle, situated in the parish, as from the interest ever attaching to the illustrious House of Courtenay, the youngest branch of which (to whom the Earldom of Devon after no long interval descended) has been seated here nearly 450 years. It is a Rectory in the hundred of Exminster and deanery of Kenn. The Church is situated on the banks of the Exe, about seven miles from Exeter. It is a handsome Edifice, erected probably about 1470, on the site of one dedicated to St. Clement in 1259, and of which the lower part of the present tower would seem to be the remains. The interior is much admired. It is in length 62 feet, not including the tower, in breadth 38½ feet. The tower is scarcely high enough to be in fair proportions, not exceeding 57 feet; it contains three bells. Over the Communion Table is a painting of the Last Supper by Cosway, not without merit, though the figures are on too gigantic a scale. There is also in the recess of the window adjoining the Pulpit, a recumbent figure of some antiquity, though without date or inscription; supposed to be that of Elisabeth, the Wife of Sir Philip Courtenay, a Daughter of Lord Hungerford. In the month of December, 1645, the church was taken possession of by General Fairfax’s party, who had been repulsed in an attack which they had directed on the Castle, and it is said they were there attacked by a detachment from the king’s garrison at Exeter, who were obliged to retreat, not without loss. The Rev. D. Nantes, M. A. is the present Rector, instituted August 26th, 1825.”