Powderham Church is dedicated to Saint Clement, one of the first Bishops of Rome. His feast is kept on 23rd November in the Anglican Communion, and he is patron saint of metalworkers and blacksmiths.

Theologically, Saint Clement is best known for his Epistle to the Corinthians, an insight into the early Church’s ministry (certain bishops have been deposed, and Clement calls for their re-instatement and the repentance of the congregation). The full text of Saint Clement’s Epistle is here, and you can read much scholarly information about Saint Clement here.

Wikipedia has an interesting article about Saint Clement, from which we have taken the paragraphs below about his martyrdom and symbology. 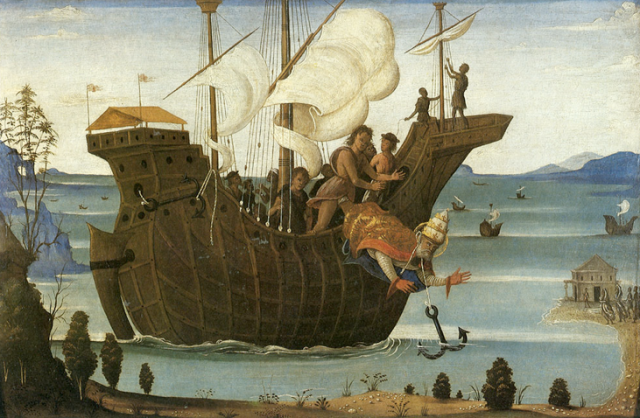 Martyrdom of St Clement by Fungai

Martyrdom of St. Clement
According to apocryphal acta dating to the 4th century at earliest, Clement was banished from Rome to the Chersonesus during the reign of the Emperor Trajan and was set to work in a stone quarry. Finding on his arrival that the prisoners were suffering from lack of water, he knelt down in prayer. Looking up, he saw a lamb on a hill, went to where the lamb had stood and struck the ground with his pickaxe, releasing a gushing stream of clear water. This miracle resulted in the conversion of large numbers of the local pagans and his fellow prisoners to Christianity. As punishment, Saint Clement was martyred by being tied to an anchor and thrown from a boat into the Black Sea. The legend recounts that every year a miraculous ebbing of the sea revealed a divinely built shrine containing his bones. However, the oldest sources on Clement’s life, Eusebius and Jerome, note nothing of his martyrdom. [from wikipedia]

Symbology of St. Clement
In works of art, Saint Clement can be recognized by having an anchor at his side or tied to his neck. He is most often depicted wearing the Papal vestments, including the pallium, and sometimes with the Papal tiara but more often with the mitre. He is also sometimes shown with symbols of his office as Pope and Bishop of Rome such as the Papal Cross and the Keys of Heaven. In reference to his martyrdom, he often holds the palm of martyrdom. Saint Clement can be seen depicted near a fountain or spring, relating to the incident from his hagiography, or lying in a temple in the sea. The Anchored Cross or Mariner’s Cross is also referred to as St Clement’s Cross, in reference to the way he was martyred. [from wikipedia]